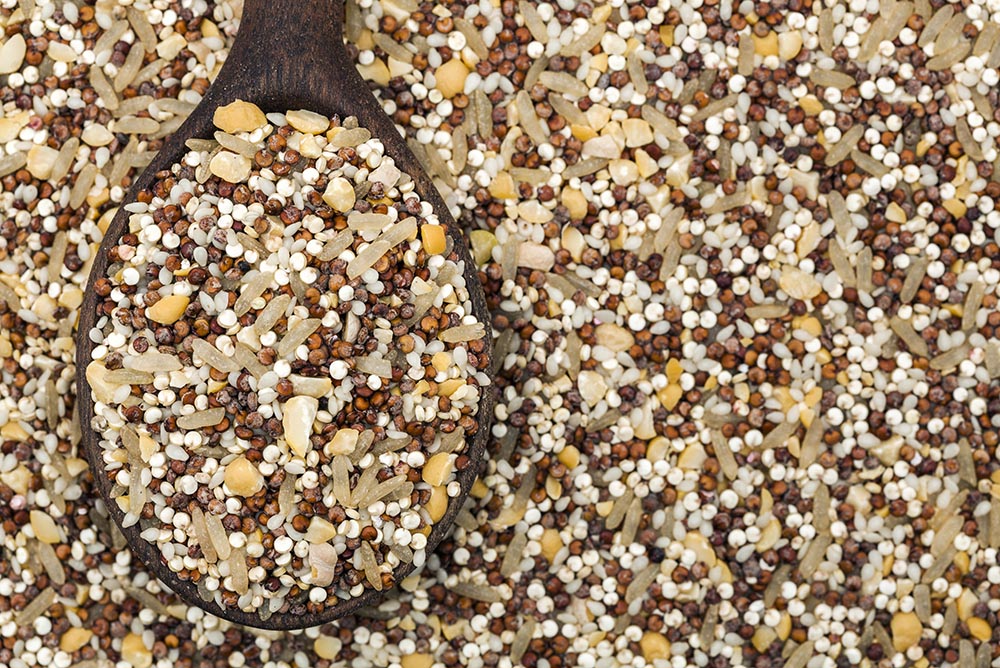 If you're looking for a nutritious, gluten-free accompaniment to meats, fish, vegetables, and vegan-friendly meals, you've probably found yourself considering both quinoa and rice. These whole-food options are the makings of champion side dishes, coming in a wide variety of colors and tastes. Both quinoa and rice can serve as the foundation for amazing pilafs, brunch masterpieces, and hearty accompaniments to stir-fries, bean dishes, and saucy stews. But which one should you choose?

If you hold up the bags, it may seem like quinoa, which is pronounced "keen-wah," by the way, is just a smaller rice. But in fact, these are two completely different foods that have their own health benefits, tastes, and uses. Let's compare these two delicious sides (or mains, depending on your recipe!), so you can make an educated choice about what to cook for your next winning meal.

The lesser-known of the two is certainly quinoa, even though nutritionists consider it a "superfood" brimming with iron, calcium, and fiber. What sets quinoa apart from all kinds of rice is its relatively high protein content. A serving of quinoa can pack in up to six grams of protein, making it an ideal addition to any plant-based diet.

It's technically not a grain, even though it's cooked like one. This seed of the goosefoot plant is native to the highlands of the Andes mountain chain in Bolivia and Peru. In fact, anthropologists have found that the Incas have been enjoying quinoa with their meals for more than 5,000 years. Like rice, there are many more varieties than just the simple white one you may see. In fact, there are more than 1,800 different kinds of quinoa grown throughout the globe.

Quinoa is much faster to prepare than rice. To make a basic batch, first rinse a cup of quinoa in a strainer and add it to a pot with about one and two-thirds cup of water and a quarter-teaspoon of sea salt. Bring it to a boil, and then reduce the heat to simmer with a lid until the water is absorbed. It takes about 10 minutes. Remove the pot from the heat and let sit for another five minutes before fluffing it with a fork and serving. You can make a big batch, as it can last up to a week in an airtight container in the refrigerator.

This tasty seed is great when used to stuff peppers or tomatoes, make hearty pancakes, cold salads, chunky soups, and even burgers or "meat" balls.

Rice to the Rescue

Rice, meanwhile, is one of the most widely eaten grains in the world. It's grown as a grass in swampy patches throughout Asia, primarily, and it's a staple in kitchens in Southeast and Far East Asia, Latin America, and parts of Africa. Its origins are traced back to India and other Asian countries like Indonesia. Today, rice has gained popularity throughout the West as a gluten-free alternative that can be served for breakfast, lunch, and dinner.

Most people think of the humble white rice, but there are many more varieties. White rice, in fact, is brown rice that's been milled to remove the grain's husk and germ. As a result, brown rice has more protein, fiber, and iron than white rice. However, you can also buy fragrant jasmine rice, Arborio rice that's a perfect base for Italian risotto, colorful wild rice, or even forbidden rice, a purple heirloom grain that was once saved for the plates of Chinese emperors.

Rice can do more than just partner up with beans or be fried with vegetables, although those are two delicious way to prepare it. This grain can be the basis of non-dairy rice milk, rolled up into sushi, seasoned with turmeric and ginger for breakfast eggs, or sweetened with dried fruits for a rice pudding dessert.

Some people use a special rice cooker for a no-brainer approach to cooking rice, but all you need is a pot, water, and salt. The amount of water you'll need depends on the type of rice, whether it's a long or short grain variety, and if it still has its husk and germ. For example, you'll need more water for brown and wild rice than you'll need for jasmine or sushi rice. It usually takes about 15 to 45 minutes for the rice to absorb the water and become tender.

Want yet another option? Now there's also cauliflower rice that's available from some retailers. This is neither rice nor quinoa–it's simply a ground-up version of the raw vegetable that is a low-carb alternative to these seeds and grains. It's cooked in the same manner and can be used for when you're ready for something besides rice and quinoa.